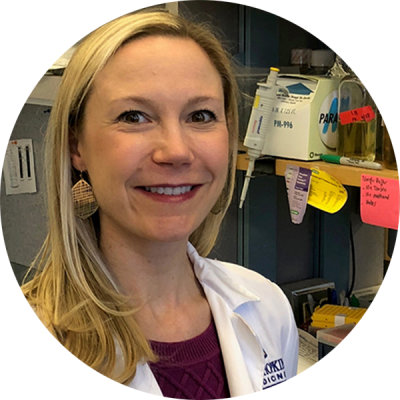 
I completed my research in the laboratory of Dr. Doug Robinson in cell biology. My goal for my pulmonary fellowship training was to identify pathways that, for the first time, halt or reverse the damage seen in chronic obstructive lung disease (COPD) using basic science techniques and a model organism. As a lung disease, COPD is the third leading cause of death in the U.S., with cigarette smoking being a major risk factor. My work in the laboratory of Doug Robinson has led to the identification of new pathways in lung biology and laid the groundwork for my future early career investigations. Utilizing a discovery platform that extends from a model organism, Dictyostelium, which is a type of amoeba, to mouse and human models, we identified a protein called adenine nucleotide translocase (ANT) as protective against cigarette smoke. ANT transports a compound called adenosine triphosphate in mitochondria, the cell’s powerhouse. Surprisingly, we found it localizes to cilia, which are tiny, hairlike growths on cells, in the human airway, where it enhances airway hydration and protects ciliary function in the context of cigarette smoke. This provides a potential pathway for small molecule or gene therapies for COPD.

Why did you choose Johns Hopkins for your work? Johns Hopkins provides a rich environment with a well-rounded, supportive and enduring network of colleagues and collaborators that allows for amazing research advances. I have found that these activities and interactions are critical for my transition to research independence and have been invaluable in helping me reach my career vision of patient-focused research by advances in basic science. What does receiving this award mean to you personally and professionally? Do you have any connection with the particular award you received? It is an honor to receive this award recognition at a time in a physician-scientist's career that can be one of the most difficult but also the most rewarding and exciting. What contributed to your project’s success (special skills, interests, opportunities, guidance, etc.)? I entered my postdoctoral research with the goal of gaining new skills in model organisms and cell biology that would complement my previous graduate research experience. One of the major factors impacting the success of my project was my mentoring team. A strong mentoring relationship is invaluable and made me a more well-rounded scientist, speaker and manager. What thoughts do you have about Young Investigators’ Day itself, as a celebration of the roles student and fellows play in research at Johns Hopkins? ​Young Investigators’ Day is a time to celebrate and support the next generation of scientists. It is truly amazing to see the breadth of cutting-edge research that is going on at Johns Hopkins at all levels, including the collaborations that form across departments, divisions and schools. This day highlights the unique strengths and creative work that is being done. What has been your best/most memorable experience while at Johns Hopkins? ​Some of the most memorable and humbling experiences for me at Johns Hopkins have been transitioning in one day from caring to a critically ill patient in the ICU to finishing an experiment in the lab. Johns Hopkins truly fosters bench-to-bedside work. My patient interactions motivate me scientifically to explore new questions and work that may someday improve outcomes for our patients. What are your plans over the next year or so?  ​I am finishing my final clinical rotations in pulmonary and critical care medicine and will move on to my first faculty position as a physician-scientist. Tell us something interesting about yourself that makes you unique. Do you have any special hobbies, interests or life experiences? ​As a mom of two kids, one of which is a newborn, I love spending my time making memories with them, including sharing my love of cooking and music. During college, medical school and residency, I was involved in a capella and other singing groups.